the little book of SITCOM

The best book on situation comedy this author ever wrote!

Writing situation comedies isn’t really that hard. So much of what you need to know is already defined for you. You know that your script needs to be a certain short length, with a certain small number of characters. You know that your choice of scenes is limited to your show’s standing sets and maybe one or two swing sets or outside locations. You know how your characters behave and how they’re funny, either because you invented them or because you’re writing for a show where these things are already well established. Sitcom is easy and sitcom is fun. Sitcom is the gateway drug to longer forms of writing. It’s a pretty good buzz and a pretty good ride, a great way to kill an afternoon, or even six months.

And now, thanks to comedy writing guru John Vorhaus (author of THE COMIC TOOLBOX: HOW TO BE FUNNY EVEN IF YOU’RE NOT), writing situation comedy is easier than ever. In The Little Book of SITCOM, you’ll find a whole trove of tools, tricks and problem-solving techniques that you can use — now, today — to be the sitcom writer of your wildest dreams. Ready to write? Ready to have fun? The Little Book of SITCOM is the big little book for you. 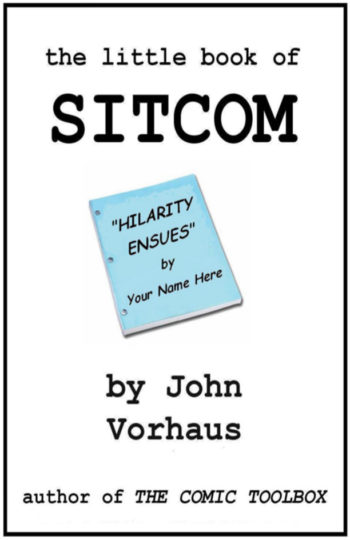 CHAPTER ONE: HERE’S THE GOOD NEWS

It took me six months to write my first sitcom script. The next one took three. I knocked off the third one in about six weeks, and I continued to get faster and faster as I learned more and more about everything from how to format a script to how to turn unfunny jokes into funny ones. Last week I wrote a sitcom script in four and a half hours. It was an ugly first draft – first drafts are ugly by definition – but I got from fade in to fade out in a single afternoon’s work, and to me that’s not nothing. So if you’ve embarked upon a sitcom writing career, and especially if it’s early days for you, I want to give you some good news from somewhat further down the line: you’ll get better and you’ll get faster. You can kick this thing’s ass.

It’ll never be as easy as you’d like it to be. You’ll never stop struggling to find the perfect turn of phrase or joke, or character key, or that one plot twist that resolves your story in a surprising, satisfying and rewarding way. You’ll never entirely free yourself from those awful moments of staring out the window, wondering why your brain is broken or where your next good idea will come from. You’ll always have moments where you think, “I suck,” and no amount of pep-talkery from others (and no quantity of overproof rum) will persuade you otherwise. But those moments will pass. You will solve your story problems. You will have good ideas. You will write jokes that are funny the first time, the next time, every time. You will get better at your craft, and eventually you will master it. Why? A couple of reasons.

First, writing sitcoms isn’t really that hard. So much of what you need to know is already defined for you. You know that your script needs to be a certain short length, with a certain small number of characters. You know that your choice of scenes is limited to your show’s standing sets and maybe one or two swing sets or outside locations. You know how your characters behave and how they’re funny, either because you invented them or because you’re writing for a show where these things are already well established. Sitcom is easy and sitcom is fun. Sitcom is the gateway drug to longer forms of writing. It’s a pretty good buzz and a pretty good ride, a great way to kill an afternoon, or even six months.

Second, improvement happens naturally. Every time you write a sitcom script you get a little better at it. You learn how to avoid dead-end stories. You learn how to enter a scene as late as possible and leave it as soon as possible. You learn how to avoid chuffa, the boring bullshit that slows down a story or scene, or as it’s otherwise known, tomando café – drinking coffee –  meaningless moments where people are just sitting around talking about nothing. You learn how to stay out of joke deserts, where pages and pages of dialogue roll by but nothing particularly hilarious happens. And you learn all of this organically, almost subconsciously, simply by attacking over and over again the problems peculiar to writing a sitcom script. Now, are you ready for the great news? This education takes place even if what you’re writing is not particularly good. It’s true. No matter how badly you suck on the page, you’re always learning something new about your craft, and thus steadily (okay, in fairness sometimes unsteadily)  moving toward a time when you generally don’t suck. All you have to do is keep writing. The learning takes care of itself.

That said, no one around you will tell you that mastering this craft is a snap. It takes a lot of work: hours and days and weeks and months of creative labor and skull sweat, trying to turn nothing into something. It’s hard on the ego to face rejection and revision and notes and suggestions from yammerheads who may or may not know what they’re talking about. It challenges your resolve when people around you (maybe your nearest and dearest) tell you that you’re wasting your time. It takes a toll on your social life when writing your next script is more important than seeing friends, doing laundry, taking a shower. There’s doubt, fear, procrastination, alienation, poverty, writer’s block, writer’s cramp and dozens of other real and imagined setbacks, hurdles, distractions and delays. It would be fully disingenuous to pretend that these roadblocks don’t exist – yet that’s exactly what I want you to do. There’s a name for this strategy. It’s called adopting a useful fiction.

A useful fiction is a certain sort of lie we tell for the sake of moving past barriers and moving closer to our goals. If you believe me when I tell you that writing sitcoms is easy, you’ll be more motivated to try, because just generally we’d rather do things that are easy than are hard. If I tell you (or you tell yourself) that you’ll get better at your craft, then you’ll cast loose the air of hopelessness that might otherwise engulf you. You’ll push ahead, having such writing days as you are able to until you find to your surprise and delight that you are, in fact, getting better at your craft. In this sense we can say that a useful fiction is a self-fulfilling prophecy. You might say that it’s a case of “fake it till you make it,” or of having faith in your ability at a time when evidence is absent. No matter how you look at it, a useful fiction is a fiction, but it’s useful just the same.

So right now I’m asking you to adopt this specific useful fiction: You can do it. Go ahead and say it right out loud. Yes, it’s dumb, but it’s not the dumbest thing you’ll do in your career, or even today. And even if you don’t believe it, you have to agree that saying, “I can do it” is a whole lot more uplifting, more enabling, and more likely to breed success than saying, “I can’t do it.” That’s the power of the useful fiction, and that’s exactly how it works. You tell yourself you can do a thing for the sake of being able to do that thing, because you know for sure that if you tell yourself you can’t, well, you won’t.

I’ve been writing situation comedies for more than a quarter of a century, and showing others how to do it for nearly as long. I’ve taught and trained writers all over the world – 26 countries on four continents at last count. Along the way, by closely examining my writing process and the process of others, I’ve developed some pretty slick tricks, and it is these tricks that I intend to share with you here. Because it’s not enough just to sell you the useful fiction that sitcom is easy. I want to make it easy. I want to help you find shortcuts, see creative problems clearly, and generate solutions you can trust. I want to help you be funny and I want to help you be sure-handed in story. You’ll find some of these techniques to be immediately useful; others will not really bear fruit until you’re somewhat further advanced in your craft. But they’ll all help in the same way: by demystifying the creative process, and making it easier and more enjoyable for you to do what you do.

So let’s have some fun, shall we? Because this is sitcom writing, after all. As jobs go, it’s not a hard one. We get to work indoors, sitting on our rhumbas. We don’t punch a clock. We play and invent and create. I remember once running a story meeting on an episode involving a woman’s decision to get breast augmentation surgery. At the conclusion of the meeting I said, “Do you realize we just spent the entire afternoon talking about boob jobs?” Sitcom. It’s nice work if you can get it. And you can get it if you try. That’s the good news, and it’s not even a lie.

So let’s start by slaying everyone’s favorite dragon: writer’s block. It’ll be nice to have that out of the way.