The only authorized spoof of DECIDE TO PLAY GREAT POKER

YOU CAN BE A DRUNKEN MASTER, TOO!

How many authors have co-written one of the world’s best books on poker — and then written a spoof of their own book? Only one that we can think of! Welcome to the devastatingly rare “self-spoof,” where the author goes to town on his and Annie Duke’s bestselling book, DECIDE TO PLAY GREAT POKER. Study the ways of the drunken master (an Ascended Stairmaster). Correlate drinking frequencies to bluffing frequencies. Learn not to drink with Finns. Also contains the complete rules of Hold’em War and important breakthroughs in strip poker. 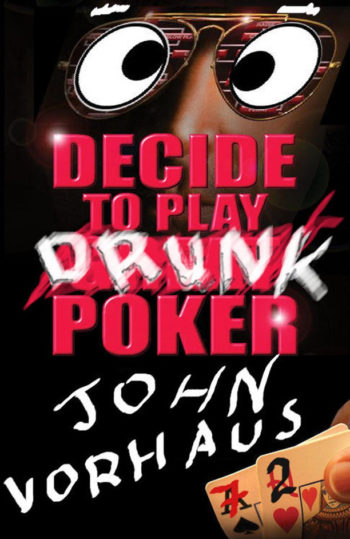 ONE: DRUNK IS THE OPPOSITE OF SCARED

The good news about drinking and playing poker is if you’re a really, really, really, really bad player to begin with, drinking won’t materially hurt your game. Same with this book: If you have no game to begin with, this won’t make it worse. Poker is a game of fear played under conditions of frightful uncertainty. Every one of us has stared into the dark heart of an unexpected check-raise and quailed – quailed, I say! – at the prospect of losing our cash or chips. And then we have folded. Folded like a map of France. Folded like an origami swan. Folded like a five spot in a floorman’s hand. Folded like any other thing you can think of that folds. Why? Because we were afraid. Fear, then, is the poker player’s worst enemy and, as such, it must be destroyed.

As the sage teaches us, “In the presence of fear, nothing is possible; in the absence of fear, anything is possible.” (Which sage teaches us that? I think it was me, but I lost my memory along with my sanity, my virginity and my hearing at a Grateful Dead concert in the Boston Garden in 1979, so I really can’t be sure. It may have been Socrates. Let’s say it was the drunken master.) Thus it is incumbent upon any great poker player to rid herself of fear. (A note about pronouns used throughout this small volume: For years I’ve either been a slave to the “male equals male plus female” convention of conventional English, or else danced around that constraint with awkward his/her or s/he constructions. Well, you know what?  I’m just drunk enough now that I don’t give a rat’s ass. All pronouns in this book will be female, say I, and if you don’t like it, that’s just tough ovaries for you.)

How, then, might we rid ourselves of fear? What methods can we use? Well, we could try detaching from outcome, for as the good book (Decide To Play Great Poker) teaches us, outcomes don’t matter, only decisions matter. But that sounds like a lot of work to me, a lot of meditating and self-study and…seriously, who has that kind of time? We might also examine the deep-seated connection that we humans make between chips, money and survival, where chips represent money, money represents the survival that money can buy, and therefore to lose chips is to imperil survival. We could deconstruct this paradigm, striving to reach the point where chips are just chips, and have no associated survival values deep in our reptilian brain. But, again, who has that kind of time? What we really need is a quick, effective shortcut to fearlessness.

Fortunately, I have one right here. It’s called methanol. And according to Wikipedia (the world’s foremost authority on everything) it’s used as an industrial solvent, car fuel, and raw material in the chemical industry. It’s also used, and has been since time immemorial, to get you faced. This makes alcohol the universal antidote to fear. Don’t believe me? Well, digging deeper into the definition of alcohol, we find that it is “The spirituous or intoxicating element of fermented or distilled liquors, or more loosely a liquid containing it in considerable quantity, known to have the effect of lessening inhibitions and creating a false sense of well-being.” Lessening inhibitions and creating a false sense of well-being. I don’t know about you, but that sure sounds like fearlessness to me. And there’s a direct relationship; you could graph it. The more you drink, the more fearless you become. Just ask any skinny bastard who’s ever gotten into a bar fight with a biker. Therefore, drink. Drink to play correctly. Drink to be fearless. Drink as much as humanly possible. Drink, and bear in mind the wise wisdom that, “Booze is not the answer. More booze, that’s the answer.”

If you’re in a casino where they offer free drinks, avail yourself liberally. If you’re playing in a home game, drink every beer you can find in the host’s fridge, including the expensive specialty brews so cleverly hidden way back behind the orange juice and the quart-size carton of yoghurt (as if you wouldn’t look there). If you’re in a place that charges for drinks, consider the cost of drinks to be part of the price of doing business, like tipping or paying a rake. In any case, don’t hold back! Remember that your goal is to get as loaded as possible as fast as possible, for the simple reason that every hand you spend playing sober poker is squandered profit.

Once you enter the proper state of advanced pixilation, you’ll be ready to pull off all the sophisticated moves of the drunken master, including such classic angle shots as betting out of turn, splashing the pot, raising from anywhere with anything, and the always-effective blind raise/blind shove perfecta. I’m not saying that these stratagems are guaranteed money makers – what in this life is guaranteed? – but I will say this: You must be 100 percent satisfied with the drunk poker method or your money cheerfully retained.

And now, because I want to cram as many chapters as possible into this shameless cheap folio, I will move smartly along to chapter two.