Who couldn’t use a little crazy in their lives right now?

What’s in this book? Some fiction, some flotsam, some dances with words, heart-stopping anagrams, found objects galore, things I’ve said about dogs, a punctuation puzzle, some gutted clichés, twitter tales, sad tales (at least one), true facts and bar facts, hilarious headlines (wait, you’ll see), wisdomettes, a whiff of poker, names needing rock bands, a noun fight, a museum of lies, a war of random words, a bit of wizardry, plus bad ideas for children, some new dirty words, a brief interlude where writing in the passive voice is done, and much more, all in fewer pages than you might expect. Order yours today. 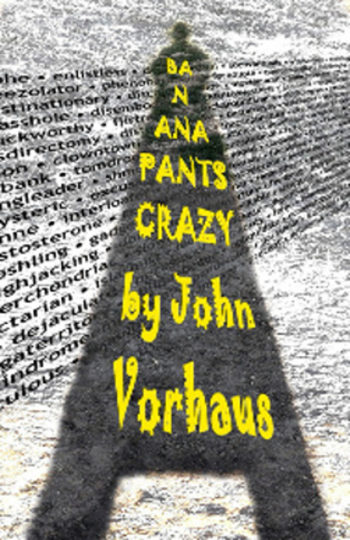 I’ve been messing with words all my life. Inventing them. Repurposing them. Doing cruel and unusual things to them. Nouning verbs, verbing nouns; nouning adjectives, which is a special brand of zanity. I don’t know why I do it; I know I can’t help it. It’s just the way I’m wired, and by wired I mean weird, and by weird I mean word.

The first word I can definitively remember inventing was flypogger. Let me give you the context:

I already know how to spell circumnavigate, thank you very much.

I have a ballpoint pen, a Pink Pearl eraser and some paperclips.

Soon I have a pink pretend frog with paperclip wings and ballpoint eyes. “Freddy Flypogger!” I loudly proclaim.

Next I have some time in detention to figure out exactly what flypogger means.

To pog, I decide, is to strike with the tongue, so Freddy Flypogger is a frog who assaults and eats flies.

And they say that detention is a waste of time.

So then I was probably twelve or thirteen when I realized that new words could be like viruses, and I started injecting them into the playground lexisphere just to see which would catch on. This was self-indulgent, dorky fun (like inventing lexisphere, like I did just now – still fun, jv; still a dork), and it directly contributed to my adolescent mindset of arrogant insecurity: In getting others to use my words, I felt smugly superior; in getting beaten up for calling someone a nuncumps or nobhob, I felt, well, bruised.

High school found me still hard at it. Once I wrote an absurdist stage comedy and my teacher said, “This isn’t a play in any sense of the word I recognize.” I guess he didn’t know about play as in playful, but whatever, his disapprobation didn’t stop me or even slow me down, and on to college I went, where I discovered that inventing bibliographical references was almost as good as (and a lot less time consuming than) finding them and I also discovered the dark pleasure of a good run-on sentence, which joy informs me, as you might have noticed, to this day.

The Elements of Style was my bible and its authors, William Strunk and E.B. White, my idols. That I turned out to be such a linguistic iconoclast cannot be considered their fault.

In my life I’ve created maybe a thousand new words. Some were happy accidents (breezolator; pluckworthy), some were duds (draculate; nasturbation). Some will be shared with you presently.

(It amuses me that presently means both now and later, just as cleave means both stick together and cut apart. If that amuses you, too, boy are you in the right book.)

Neolojisms are not the only way I’ve spread my seed around here.

I have done so many unmentionable things.

I have abused global search-and-replace to make the sublime…

Our Father, Who art in heaven

Hallowed be thy name;

Thy will be done,

on earth as it is in heaven.

I’ve reduced the Pledge of Allegiance…

I pledge allegiance to the Flag of the United States of America, and to the Republic for which it stands, one Nation under God, indivisible, with liberty and justice for all.

to pure phonetics, just to mask the meaning…

I’ve made shameless hay with Google Translation, turning this…

What a piece of work is man!

That man is a piece of work!

I collect grammatical miscues like some people collect poker chips (which I also collect). If your store sign reads Re-Grand Opening, trust me, I will take a picture of it and mock you mercilessly in my mind. And if you’re a newspaper headline with an unintentionally hilarious second meaning, watch out! I will place you in a scrapbook and accompany you with a snarky remark.

Just see if I don’t.

I have anagrammed my ass off many times, sometimes for money, mostly for sport, now and then for poetry, as you shall soon see.

I can’t help it. Really I can’t. English reinvents itself all the time around me. Yesterday I accidentally typed the word doughbutts instead of doughnuts, and that made me so happy. For the zumpty-zumpth time, I’d found the event horizon of vocabulary, a vein I have mined many times, leaving a strew of mixed metaphors in my wake.

Sometimes my words coalesce into larger forms, like galaxies swirling out of the void. Some call this fiction. Some call it lies. I don’t draw much distinction. I write such stories to pass the time – mine in writing, yours in reading.

So that’s what this book is: some fiction, some flotsam, some funny, some found art, some rimy rhymes, some odd turns down wrong roads, all gleaned from many blissful hours spent lost in letters, words, sentences, paragraphs and pages, now capriciously curated and here shared with the world – or anyway the small but significant part of the world that comprises, uh, you.

It was no problem to compile this content, but it sure was a botheration to name. My first working title was:

The idea here was for a small, handy paperback that you could read during those precious, endless, ten minutes of flight time – takeoffs and landings – when the use of portable electronic devices was banned. But they’re banned no more, so there went that title.

No problem. I quickly pivoted to:

For the Fractured Attention Span

of the Twenty-first Century Mind

I knew from my own experience how hard it has become to read anything for any length of time in our modern world of information overload, where if you can’t express your thought in 140 characters, no one sticks around for the 141st. Competition for eyes and minds is fierce these days, and nowhere is this more evident than on the very devices we use for reading books but also for playing games, checking email, texting, tweeting, and pre-ordering our caffeinated beverages to go.

I had thought to turn the brevity of these pieces into a virtue. THREE-MINUTE READS would be a hunk of content that you could pick up or put down anywhere: in the bathroom; by your bedside; on a plane; waiting in line for your caffeinated beverage.

But there was this truth-in-labeling thing. See, some of these reads are, in fact, three-minute reads; others are 30-second reads; a couple run a good ten minutes. But a factually correct title like, say –

and Some Much Shorter

Back to the drawing board I went.

I decided that I needed to consult an expert on the subject of how to come up with titles for things.

Fortunately I happened to know one: er, me, John Vorhaus, author of The Comic Toolbox.

In that book, on the subject of titles, I wrote, “Existe una cosa que se llama la promesa del título. Si yo voy a ver…”

In English I wrote:

There’s such a thing as delivering on the promise of a title.  If I go see a movie called, for example, Bill and Ted’s Excellent Adventure, I expect, if nothing else, an excellent adventure, and I’ll be disappointed if the movie doesn’t deliver the goods.  Likewise, a TV show called Family Ties figures to deal in some way with family life.  Either that or some odd bondage thing.  James Thurber’s story, “The Defenestration of Erminitrude Inch,” promises that someone will get thrown out a window.  Every title makes a promise, and the film or show or book or cartoon strip or one-man mime troupe which fails to deliver on that promise risks losing its audience altogether.

I went on to postulate (in English and Spanish) that a good title is one that’s, at minimum, clear. If it’s also engaging and inviting, well, that’s a bonus.

By that measure, “The Defenestration of Ermintrude Inch” both succeeds and fails. It succeeds by being intriguing; however, if you don’t know what defenestration means (the act of throwing someone or something out a window), then it kind of fails the clarity test.

I applied that metric to my next working title…

which was meant to suggest, you know, leftovers and odds-and-ends. I market-tested this title with my dog, who gave me a blank look, and with my wife, who said I could do better.

Sigh. Back to square one.

I kept searching, composing, assessing, obsessing and testing. I tried…

which I kind of liked, but worried that the title might make a promise that the content couldn’t keep because, you know, plenty of pieces, but where’s the war?

which made no sense whatsoever.

A GLIMPSE INSIDE THE TWISTED MIND

AND ODDBALL THOUGHT PROCESSES OF

Then I did what smart people do when they come up against problems they can’t solve.

I figured that my subconscious could chew on the challenge while my body went on vacation to a nice resort.

There, by serendipity, I happened to share a hot tub with some passionate acolytes for a new multi-level marketing enterprise which was, to them, the road to financial salvation, but to me just looked like a garden-variety pyramid scheme. Later I went online to see if I was right (of course I was) and there found one memorable, uncharitable description of the venture’s business model:

Oh, I fell in love. I fell so hard. That was just what I was looking for. First of all, it sounded like me; that is, if you were to describe me as banana pants crazy, I wouldn’t object. Second, it was a found object, and since much of what you’ll find here is found art of one kind or another, the title, being found (read: stolen) could be considered a meta commentary on the content. I liked that. I also liked how the crazier the content became, the more it would deliver on the promise of the title.

So I market-tested it with my dog, who said, “Woof,” and with my wife, who said, “I’ve heard worse,” and that was that with that.

Ladies and gentlemen, I give you…